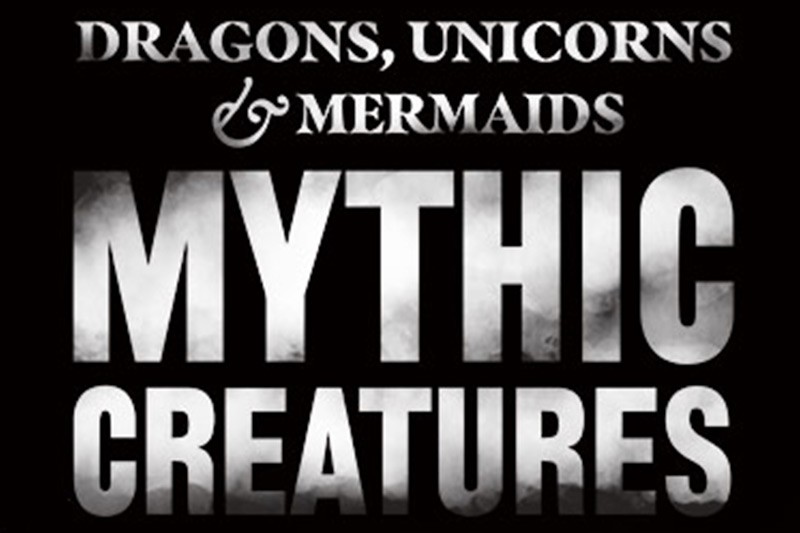 COLUMBUS, OH – From the majestic unicorn to the sleek mermaid to the mighty kraken, certainly these are just tall tales or figments of our imagination…or are they? Find out when COSI opens Dragons, Unicorns & Mermaids: Mythic Creatures on February 23, 2019.

Dragons, Unicorns & Mermaids: Mythic Creatures is the third traveling exhibition in a new and unique collaboration between COSI and the American Museum of Natural History in New York City. The partnership began with the opening of the American Museum of Natural History Dinosaur Gallery in November 2017. The exhibition traces the natural and cultural roots of some of the world’s most enduring mythological creatures from Asia, Europe, the Americas, and beyond. This amazing exhibition includes imaginative models, paintings, and textiles, along with other cultural objects from around the world ranging from Chinese shadow puppets to Greek coins that bring to light surprising similarities and differences in the ways people around the world have been inspired by nature to envision and depict these strange and wonderful creatures.

“This exhibition combines mythical lore with scientific undercurrents, tracing the origins of these popular and fascinating fictional creatures and exploring the often factual inspiration behind them,” said Dr. Frederic Bertley, COSI president and CEO. “Through large scale models, real fossils and beautiful artwork, people of all ages will start to understand the intriguing stories behind these mythic creatures and their role throughout history in many cultures.”

For many centuries, humans around the world have brought mythic creatures to life in stories, music, and works of art. Today these creatures, which were sometimes inspired by fossils or living animals, continue to delight us. Organized by the American Museum of Natural History in New York, this exhibition reveals the relationship between nature and legend throughout history from Pliny the Elder, who, in 77 c.e., asserted that mermaids were “no fabulous tale,” to the current sightings of Scotland’s renowned but unsubstantiated Loch Ness Monster.

“We are very pleased to continue our ongoing collaboration with COSI with the presentation of ‘Dragons, Unicorns & Mermaids: Mythic Creatures,’” said Ellen V. Futter, President of the American Museum of Natural History. “This exhibition, with its exploration of how nature has informed and inspired the human imagination, was extremely popular with visitors in New York, and we’re very excited now to share it with audiences in Columbus.”

Dragons, Unicorns & Mermaids: Mythic Creatures features models and replicas of preserved specimens from the American Museum of Natural History and other museums’ collections as well as cast fossils of prehistoric animals to investigate how they could have, through misidentification, speculation, fear, or imagination, inspired the development of some legendary creatures. For example, visitors will discover how narwhal tusks from the North Sea, introduced to continental Europe by Scandinavian traders, lent credence to the centuries-old belief in the unicorn, and how dinosaur fossils uncovered by Scythian nomads may have been mistaken for the remains of living, breathing griffins. Persistent tales of undersea monsters may simply be sightings of real creatures such as the oarfish and giant squid, which are just as wondrous as any imaginary denizens of the deep.

Dragons, Unicorns & Mermaids: Mythic Creatures also offers numerous interactive stations throughout the exhibition, inviting visitors to touch casts of a narwhal tusk, the lower jaw of <em>Gigantopithecus, and a life-size reproduction of the talon of a Haast’s eagle (Harpagornis moorei). Activities include rearranging scale models of mammoth bones to look like a giant human skeleton and Protoceratops bones to look like a griffin skeleton. Visitors can build their own dragon in an engaging touch-screen interactive and watch it come alive before their eyes in a virtual environment. Videos include interviews with experts in various fields discussing the significance of mythical creatures and their possible real-life counterparts. Other interviewees include Christopher Paolini, the young author of the best-selling books Eragon and Eldest; award-winning artist Takeshi Yamada, who creates “mythic creatures” today; and artists from motion-picture visual effects company Industrial Light and Magic (founded by George Lucas) demonstrating the process of creating dragons for popular movies such as Eragon.

Other exhibition highlights include: a 120-foot-long Chinese parade dragon, used in New York City’s Chinatown to perform the traditional dragon dance at the Lunar New Year; a replica “Feejee mermaid,” of the type made famous by showman P. T. Barnum, created by sewing the head and torso of a monkey to the tail of a fish; and four tremendous, “life-size” models of mythical creatures: a 17-foot-long dragon with a wingspan of over 19 feet; a 10-foot-long unicorn; an 11-foot-long Roc with large, sharp talons swooping above the heads of visitors with a wingspan of nearly 20 feet; a kraken, whose 12-foot-long tentacles appear to rise out of the floor of the exhibition as if surfacing from the sea; plus two actual life-size models—an over-6-foot-tall, extinct primate called Gigantopithecus; and the largest bird ever to have lived, the over-9-foot-tall, extinct Aepyornis.

This email address is being protected from spambots. You need JavaScript enabled to view it. | http://www.cosi.org