The original idea for COSI was born during a business trip to Chicago in 1957 by Sanford N. (Sandy) Hallock ll, who worked as an account executive for the Byer and Bowman advertising agency. While there, he visited the Museum of Science and Industry which he had visited as a boy with this father. Something must have clicked on this visit, however, for when Sandy returned home, he said to his wife Peggy, “Do you know what Columbus needs? It needs a Museum of Science and Industry!” Sandy’s lifelong interest in science and technology led him to pursue the dream of creating such an institution in Columbus, and in 1958 he wrote the original proposal for a Center of Science and Industry. 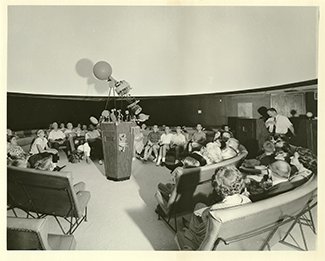 The actual creation of COSI resulted from a fortuitous coming together of personalities and circumstances. The inspiration and idea for the Center, of course, came from Sandy Hallock who took the idea to a business acquaintance, Herschel Stephan. Mr. Stephan was the President of the Franklin County Historical Society which was housed in the county’s old Memorial Hall building at 280 E. Broad Street, Columbus Ohio. He took the idea of creating a science museum to the Historical Society’s board of Trustees. In November of 1961, the Board presented a formal plan to establish a Center of Science and Industry to the Franklin County Commissioners, who, at the time, were trying to preserve Memorial Hall which had fallen into considerable disrepair.

In October, 1962, the Franklin County Commissioners agreed to allocate the funds needed for the renovation of Memorial Hall. 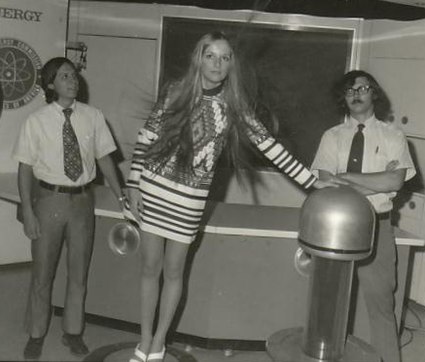 Preston Wolfe, publisher of the Columbus Dispatch, had been instrumental in getting the County Commissioners to save this county building from demolition and became a strong backer of the idea to transform Memorial Hall into a science center.

Herschel Stephan was responsible for bringing on board his close friend and neighbor, Walter English, as a member of the Franklin County Historical Society’s Board of Trustees. Mr. English soon became the Center’s most enthusiastic backer, and eventually served many years as President and Chairman of the Historical Society and of COSI. He helped ensure COSI’s financial stability during the early years.

By the 1950’s Memorial Hall was considered by many a “white elephant.” The building was falling into disrepair, a bond issue to overhaul the building was defeated and there wasn’t much of a consensus among city leaders about what should happen to old Memorial Hall.

Sandy Hallock, Herschel Stephan, and Historical Society Director/Secretary Dan Prugh took the plan and a model of the Center all over the city to business leaders to gain their support and to convince them to build and sponsor exhibitions that would become part of the new Center housed at Memorial Hall.

On January 1, 1963, the Historical Society Board appointed Sandy Hallock Executive Director of the Center of Science and Industry. During 1963, Memorial Hall was remodeled to accommodate the new Center. Work included the addition of a second floor and the installation of a drop ceiling and new lighting in the lobby. Another feature was a huge circular "cyclorama" wall in the lobby featuring a quote from astronaut John Glenn. 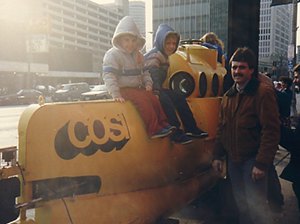 COSI opened to the public on March 29,1964. That first day, an Easter Sunday, COSI welcomed more than 5,000 guests, who paid 50 cents for an adult and 25 cents for a youth admission.

After 35 years in Memorial Hall, COSI moved to its current location in downtown Columbus at 333 West Broad Street on November 6, 1999. Internationally renowned architect Arata Isozaki designed the 320,000 square foot building to showcase the future of COSI. Since 1964, COSI has welcomed more than 33 million visitors from all 50 states and numerous foreign countries. 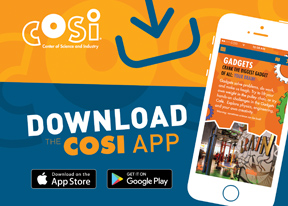