COSI’s President and CEO to host weekly series, “QED with Dr. B” highlighting breakthrough scientific discoveries and fostering science literacy
The Center of Science and Industry (COSI) and WOSU Public Media, a PBS affiliate station, are collaborating on a brand new magazine-style weekly primetime television series, QED with Dr. B. Hosted by COSI President and CEO Dr. Frederic Bertley, a globally renowned researcher and immunologist, the first season’s 13 episodes will feature one-on-one talks with scientists, engineers, and innovators from across the globe around innovative science topics that impact our daily lives. The series premieres Wednesday, January 27, 2021 at 7:30pm on WOSU TV (channel 34.1). 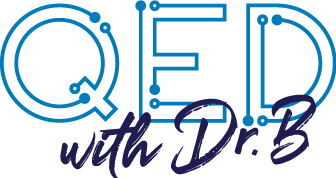 QED, which stands for Quod Erat Demonstrandum, or Quite Easily Demonstrated, was inspired by Dr. Bertley’s lifelong commitment to improving science literacy at every age. In QED with Dr. B, Dr. Bertley, a thought leader in the fields of applied science, science education and community engagement, seeks to connect people to complex science topics in an easily digestible, unintimidating and exciting way.

“Science is for everyone and everywhere. During the pandemic, people started to really understand the critical importance of science and science literacy,” said Dr. Frederic Bertley, COSI president and CEO. “QED with Dr. B is a fantastic resource for people to increase their knowledge, interest, and curiosity around science.”

“WOSU is so excited to produce this new science and technology series in a unique collaboration with COSI and Frederic Bertley,” said Tom Rieland, WOSU general manager. “We believe the timing is particularly right for growing an understanding and appreciation for cutting edge scientific research and discovery and a great deal of that is happening right here in Central Ohio.”

The first season of QED with Dr. B explores ‘superbugs’ and antibiotic resistant bacteria; human variation in skin color and how the concept of race is a social, not biological, concept; viruses; the ethics of gene editing in the fight against diseases; how climate science works throughout our daily lives; and from the humble Roomba vacuum cleaner to self-driving cars, how artificial intelligence could revolutionize our world.

“It’s been an absolute pleasure to collaborate on this series with WOSU, the premier public media station here in Central Ohio,” said Dr. Bertley. “We’re also proud to be the first and only science museum in the country to co-produce a primetime science television show for adults. COSI could not be more pleased to have this opportunity to continue our mission to serve as a catalyst for science engagement and science literacy.”

Join Dr. Bertley and WOSU TV’s Emmy Award Winning producer Diana Bergemann for an exciting live Q&A on WOSU TV’s Facebook page after the premiere of QED with Dr. B on January 27, 2021 at 7:30pm on WOSU TV. The Q&A will begin promptly at 8:00 p.m.

For more information on COSI and QED with Dr. B visit cosi.org and wosu.org/QED.

Support for QED with Dr. B comes from the American Electric Power Foundation.