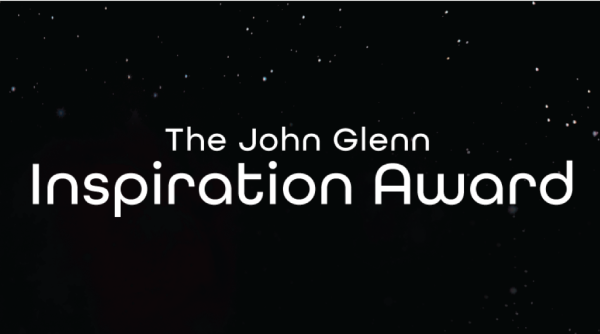 The first award in the nation, bearing the esteemed astronaut and senator’s name, the John Glenn Inspiration Award recognizes an outstanding, exceptional leader and individual who has dedicated their life to innovation, inspiration and amelioration of the human condition. With the blessing of the Glenn Family, the annual John Glenn Inspiration Award is selected and approved by a committee of regional and national leaders in the for profit and non-for profit sectors.

COSI and the Honorable John Glenn had a very rich history. Senator Glenn was instrumental to COSI’s success from the very beginning with a belief that COSI is for all, declaring that “everyone should be a member of this wonderful place!” – from buying a COSI Membership in the early days to selecting COSI as one of the very few Earth locations to receive air-to-ground communication during his second flight in space. Senator Glenn’s voice was recorded and used for the re-opening the COSI Planetarium in 2014, and COSI proudly features a replica of Senator Glenn and his historic Friendship 7. Senator Glenn once famously stated, “to me, there is no greater calling. If I can inspire young people to dedicate themselves to the good of mankind, I've accomplished something.” His inspiration continues to live on throughout the halls and programs at COSI.

“There is a long history between COSI and Senator Glenn and we are thrilled to honor his legacy in this way,” said COSI President and CEO, Dr. Frederic Bertley. “John Glenn’s footprint was “out of this world” and throughout his military, NASA, and political career, Senator Glenn was an unparalleled leader who inspired generations of individuals and afforded us so many great leaders. It is truly fitting that the inaugural awardee for the John Glenn Inspiration Award goes to a deserving member of our community in Battelle’s Lou Von Thaer. Mr. Von Thaer’s commitment to science, engineering and technological innovation towards an improved human condition, and his broad and consistent community support makes him an outstanding recipient.”

“I am truly honored to be named the first awardee of the John Glenn Inspiration Award,” said Lou Von Thaer. “The mission of our founder Gordon Battelle is right in line with John Glenn’s calling to inspire young people to dedicate themselves to using science for the betterment of humankind. It’s part of our DNA and it’s what we do at Battelle every single day. In that spirit, I am thankful for this honor.”

Mr. Von Thaer is a trustee at The Ohio State University and serves on several boards including Nationwide Children’s Hospital, National Veterans Memorial and Museum and TAPS (Tragedy Assistance Program for Survivors). He will be honored virtually during a ceremony on the first day of the COSI Science Festival, May 5 from 12:30pm – 1:30pm. The ceremony is free and open to the public. Visit cosi.org to pre-register for the event.